Getting the Right People on Your Bus

HomeBlogArticles by the authorGetting the Right People on Your Bus 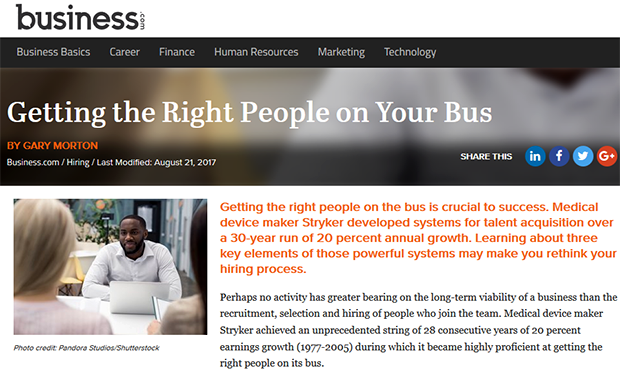 Getting the right people on the bus is crucial to success. Medical device maker Stryker developed systems for talent acquisition over a 30-year run of 20 percent annual growth. Learning about three key elements of those powerful systems may make you rethink your hiring process.

Perhaps no activity has greater bearing on the long-term viability of a business than the recruitment, selection and hiring of people who join the team. Medical device maker Stryker achieved an unprecedented string of 28 consecutive years of 20 percent earnings growth (1977-2005) during which it became highly proficient at getting the right people on its bus.

Over nearly three decades, Stryker added tens of thousands of employees and evolved powerful methodologies to optimize selection and recruitment. Many advancements came through an extensive working partnership with the Gallup organization. Along the way, Stryker learned many do’s and don’ts. I was the VP, general manager of one of the company’s fastest growing businesses during this evolution and that experience supports me in taking you on a deep dive into three of the most cogent lessons….

You can continue to read more by clicking image below.